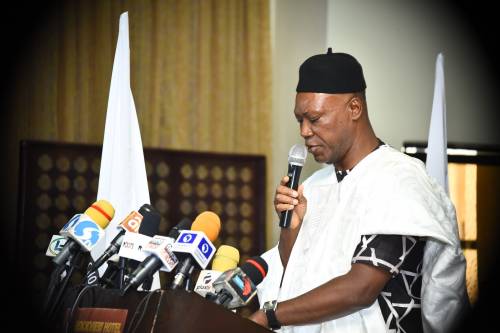 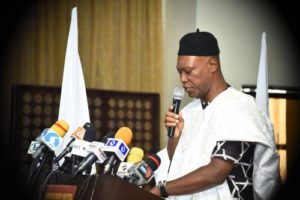 The African Action Congress, AAC, has dragged its former national secretary, Leonard Ezenwa and others who participated in a widely televised suspension of pro-tem party Chairman, Omoyele Sowore to court.

Leonard Ezenwa in the company of one Mazi Okwy had on May 13, 2019, announced the suspension of Omoyele Sowore; and eight others, including its Deputy National Chairman (South West), Ogunlana Rotimi Jacob, for a period of six months over alleged anti-party activities.

Shortly after, the Independent National Electoral Commission (INEC) discarded the suspension and maintained that the only chairman it recognizes is Omoyele Sowore.

However, the party on Friday dragged the participants in the event to court as conveyed in a statement by Rachel Onamusi-Kpiasi, director public relations, and media for the party.

The statement reads: “Today, 28th May 2019, the African Action Congress (AAC) took its first legal steps towards a conclusive end to the greedy, grasping reaches of the expelled former national secretary, Leonard Nzenwa and his cohorts.

“Our lawyers have approached the courts to firmly and vehemently deny all of Nzenwa’s lies, claims, and accusations, and will present evidence showing irrefutably the character – or lack thereof – of the man and his followers, and we will have our day in court as the case has been adjourned to the 24th June 2019.

“Before that time, there are some truths that must be made known; some legal facts that Nzenwa, with all of his newly-acquired friends and their dishonest wealth, cannot make dispel with:
There is no court injunction naming Leonard Nzenwa as the “Acting Chairman” of the African Action Congress. He sought the position from the court in the same suit where he requested to have Sowore suspended as chairman and it was never granted.

“To all intents and purposes, Leonard Nzenwa remains exactly what he always was: an outcast without the support, the control or the ability to run a party driven by Omoyele Sowore’s ideas and vision for Nigeria.

“Today, the African Action Congress garnered a victory in court; a victory that is sure to cripple their plans to profit off the hard work, sweat and endeavours of the TiB/AAC leadership over the past fourteen months, Nzenwa’s lawyer has been forced to make an undertaking before the court that his planned national convention on the 5th of June will not hold because it is illogical and indeed illegal to do so while the case he hastily brought before the courts is still pending.

“The founders and leaders of both the Take it Back Movement and the AAC party are very astute students of history and politics, both within and outside Nigeria, and, when they conceived and birthed both the TiB and AAC, they did so with foresight, putting the necessary structures and guardrails in place to ensure that the pedestrian political jobbers who will invariably be embedded in our midst do not have the control, the instrumentalities, nor the capabilities to actualize the nefarious, destructive missions.

“The Take it Back Movement is resolute in its crusade for Nigeria’s liberation and progress. An integral part of this goal is freedom from the ties that bind us to malfeasance and utter demoralization. We continue to fight corruption wherever we find it. The struggle continues because Nigeria MUST progress.”

el-Rufai Not Against Any Religion – Archbishop

May 9, 2021
Bricks Write promises to be a fair and objective portal, where readers can find the best information, recent facts and entertaining news.
Contact us: news@http://brickswrites.com.ng