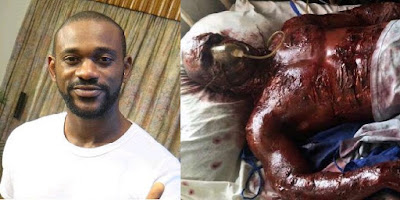 72 hours after a video of actor Ani Iyoho burning in an alleged movie stunt gone wrong went viral, everyone is shocked to discover that the entire frenzy was the result of a perfectly planned, and well-executed publicity spin conceived by Nollywood director Stanlee Ohikhuare.

Explaining why he did it during a press conference, Stanlee says he believes the stunt would cause a remarkable change in the attitude and perception of fellow Nigerians and the world at large, towards
Nollywood’s potentials.

That he did it to create film awareness and industry patronage via media engagement; utilizing the ever evolving social media platform to gain reach and peculiar attention to an entire industry.

He also added that Government intervention is needed to ensure that there’s adequate funding to curb ugly occurrences like the one insinuated in the circulated video.

2019: I Will Bring Biafra Back To Nigeria If Elected_ Olawepo Hashim

November 30, 2018
Bricks Write promises to be a fair and objective portal, where readers can find the best information, recent facts and entertaining news.
Contact us: news@http://brickswrites.com.ng