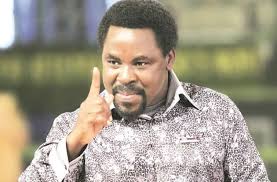 Few days to the US election, popular Nigerian prophet, TB Joshua, told his congregation that 10 days earlier he saw a revelation that a woman [Hillary Clinton] won the US presidential election.

Anyway, Prophet TB Joshua has reacted to the outcome of the election. His words:

MY VIEW REGARDING THE ELECTION (US)

We have seen the outcome of the election in America. Having read, you will notice that it is all about the popular vote, the vote of the majority of Americans.

In this case, we need the Spirit of a Prophet to recognize or to know a Prophet. Our levels are different. We are not on the same level.

We might have great cathedrals, huge bells, and all kinds of activities that are good by human standards but human point of view is limited.

I see many people trying to interpret prophets on the basis of their own minds and ideas. The prophecy seems to cause uproar, to many who gave it different meaning and interpretation.

Finally, campaigns and elections in any democratic country in the world are never about one person, it is about the country we care and love. Whichever way it happens, we must accept the outcome and then look to the future (God), the Author and Finisher.

Democracy is all about accommodation. All democrats must value the process of democracy more than the product.

Minister of Power, Works and Housing​ lists achievements of his ministries in the last one...

June 9, 2020
Bricks Write promises to be a fair and objective portal, where readers can find the best information, recent facts and entertaining news.
Contact us: news@http://brickswrites.com.ng