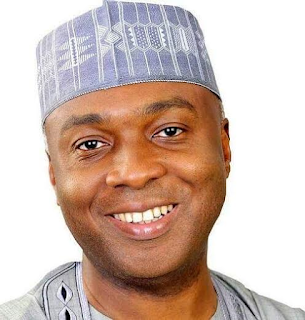 Senate President Bukola Saraki has released a statement denying claims in some quarters that he has joined the PDP. Saraki briefly attended a PDP
caucus meeting in the senate yesterday July 20th. Many believed his attendance was a move to join the opposition party. In a statement released by his media aide, Bamikole Omishore, Saraki denied the claim. Read the statement below

The attention of the Senate President’s Media Team has been drawn to a false publication that is making the rounds on social media that Senator Abubakar Bukola Saraki has defected from the ruling All Progressive Congress (APC). This fabrication is entirely untrue as the Senate President stands committed to the APC; a party that he helped midwife and worked for its victory in the 2015 elections.

In his official capacity as Senate President and chairman, National Assembly, he attended the end of session event of the PDP caucus yesterday evening and spent only 30 minutes before leaving the members to continue with the event.

The Senate President would like to assure every Nigerian that he is committed to the APC-led government and appreciates the confidence reposed in him and the APC during the 2015 General Elections.