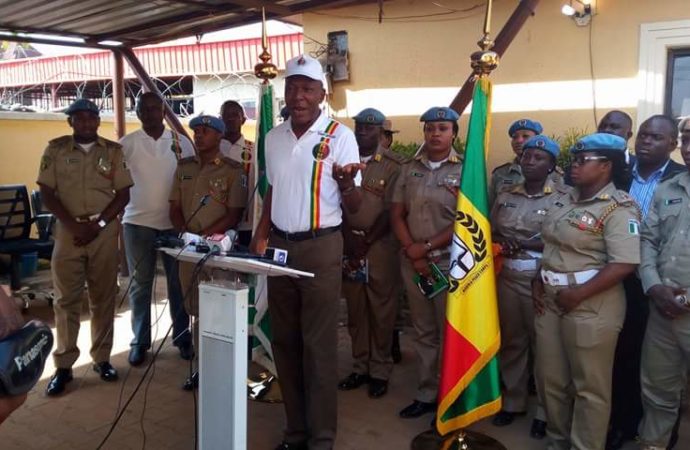 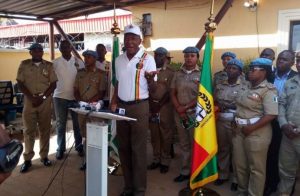 The Peace Corps of Nigeria (PCN), on Wednesday, fired back at the Nigerian Police, saying it lacked the capacity to proscribe any registered organisation in Nigeria.

The Police had yesterday, in a statement signed by the Force Public Relations Officer (FPRO), CSP Jimoh Moshood, explained that, it could not obey courts orders to unseal Peace Corps office because a federal government gazette in 2013 had proscribed the organisation.

However, in a swift reaction, the Public Relations Officer of the PCN, Patriot Millicent Umoru said, it was only the Attorney-General of the Federation (AGF) that possed such powers as to issue federal government gazette, with the approval of the President.

Umoru who addressed Journalists in Abuja, dared the Force PRO to tender such gazette to the public, if it exists, adding that, “Federal Government Gazette is a public document and not a Police diary”.

She said, “the so called proscription of the Corps that Moshood alluded to was a mere pronouncement by the Police, which is a grand conspiracy between the then National Security Adviser, Col Sambo Dasuki (rtd), who is currently undergoing trial for massive looting of the treasury and the former FCT Commissioner of Police, Late John Haruna.

“Meanwhile, that pronouncement was duly challenged in the court of law, where His Lordship Justice Ibrahim Auta, the then Chief Judge of the Federal High Court declared it a nullity and gave stern warning never to do such or even make reference to it again.

“It might interest Nigerians to know that, the Police did not appeal this judgement till date”.

On the excuse that the Police would not vacate Peace Corps property as the court ruling has been appealed, the Peace Corps Spokesperson said the Police was been economical with the truth by claiming that there was a stay of execution.

“Issuing a press statement a day after Justice John Tsoho of the Federal High Court, Abuja delivered judgement, turning the ill-motivated request to seal the office of the Peace Corps and even went further to order them (Police) to unseal the building, shows that the Police has lost its respect for the sanctity of the rule of law and Abuja clear indication that it is overtly desperate to tarnish the hard earned image of our organisation.

“The same Police satanic statement equally came the same day that the Senate overwhelmingly called on our amiable President Muhammadu Buhari to quickly assent to the Nigerian Peace Corps (Establishment) Bill, so that its members who are mostly graduates can fill in the gap in complementing the efforts of security agencies in tacking crime through intelligence gathering and neighbourhood watch”, she added.

Umoru also accused the Police of whipping up negative sentiments against the Corps, which was internationally recognised by the United Nations and the African Union, so as to frustrate the highly anticipated Presidential assent.

Recall that Justice Gabriel Kolawole of the Federal High Court, Abuja division, in a fundamental human rights enforcement suit, ruled November 9th 2017, asking the Police to unseal the corporate headquarters of the Corps and also awarded N12.5m damages against the security agency.

Similarly, Justice John Tsoho of the Federal High Court Abuja, on Monday, declared as “act of illegality”, the continous sealing of the Peace Corps office located at No 57 Iya Abubakar Crescent, off Alex Ekwueme way, opposite Jabi Lake, Jabi, Abuja, asking the Police to vacate the premises immediately.

The Police, however, in a press statement signed by the FPRO on Tuesday, said it would not obey the court order as Peace Corps of Nigeria remained a proscribed organisation, citing national security, extortion of money from applicants as other reasons.

December 29, 2016
Bricks Write promises to be a fair and objective portal, where readers can find the best information, recent facts and entertaining news.
Contact us: news@http://brickswrites.com.ng