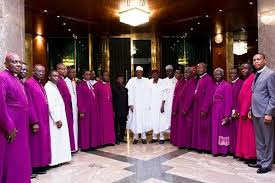 Dear Nigerian Christian,
If you saw my first letter you would have known that I used to be a Muslim but now a Christian. I have been in hiding because, anyone born a Muslim and converts to Christianity has a death sentence on his head. It is even worse now that they know I have decided to reveal their hidden agenda to the Nigerian Christian who stupidly voted Buhari, a known jihadist as president.

In that letter I told you about the subtle ways president Buhari is going about his islamization agenda. In this part I will explain, with Islamic teachings why our president is making some of his moves without caring about the feelings and sensibilities of Christians in Nigeria. So much has happened since my last letter and God willing, I will continue to educate you as things unfold. Please pray for me cause the forces of darkness are arrayed against me for telling the truth. And if you ever hear that I get killed don’t weep for me. Just know I have finished my race and am with the Lord Jesus. The same Jesus I rejected all my life as Muslim. The same Jesus I called a prophet of Allah who is a little lower that the false prophet Mohammed. To Jesus alone be all the praise, glory and honor for saving me from the satanic cult called Islam. I now worship this same Jesus and will do so till is expire.

Have you noticed that whenever any Christian, occupying a high position in any government agency is removed only muslims get to replace him or her?

200 military officers were retired recently and guess what? They were either southerners or Northern Christians. As far as the northern Muslim is concerned, if you are a southerner you are a Christian. And being a Christian means you are the worst creatures of Allah. Now you may ask, why is that important?

By 1914, the ottomans of turkey began a propaganda that presented the Armenian Christians as a security threat. So what did they do? In 1915 they retired all Christians from the Turkish army. Once they Christians were disarmed they started killing the Christians. This is how turkey became almost one hundred percent Muslim country. For those who do not know. Remember the seven letters to the seven churches of revelations 1-3? All those churches were located in today’s turkey. Islam has wiped out Christianity from turkey. This was the exact model that Hitler used in Germany to wipe out six million Jews.

I want to advice Niger delta never to disarm. There is what we call in Islam, the treaty of hudaibiya. This is the peace agreement that their prophet, Mohammed had with the meccans. the peace treaty was to last for ten years but Mohammed, seeing that the meccans had relaxed, launched a military campaign two years into the peace treaty and that was how Mecca fell to Islam. This was Yar A’dua’s plan when he gave the militants amnesty. Had he lived longer the amnesty would have been stopped. Buhari actually thought that the militants had fully disarmed hence he stopped the amnesty. I guess Jonathan, by the leading of the Lord empowered them even more militarily before he left. Mohammed said, war is deception.

In my last letter I told you about the useful idiots. The GMD of NNPC Mr Kachikwu was just relieved of his position and guess who replaced him? Another Muslim. Now they have started instituting corruption charges against him. One down more to go. Soon Amaechi will go too. Almost every Christian is out of government. All the military chiefs are muslims. Custom, immigration etc are all headed by muslims now. Yet my fellow senseless Christians still cannot see what is happening. Did you know that the new IG of police is also a Muslim? Do you know how many senior officers were retired just to pave the way for the new IG? Guess the first thing he did? Accused the former IG of stealing 24 police vehicles. Thank God that alarm was proven false but they never give up. They must find some frivolous charges against him. Just wait and see.

Again, during the elections you would have been familiar with the grandest deception called the #bringbackourgirls led by a Christian Mrs Oby Ezekwesili in collaboration with other Northern women. Do you know that the female principal of the chibok girls college has now been appointed to the position of commissioner of education in Borno state? Since when do secondary school principals get appointed as the commissioner of education in a state where you have university and polytechnic lecturers, VCs and Rectors? Madam Oby’s Muslim Vice was first appointed as chief of staff by El Rufai of kaduna state and guess what happened next? Buhari just appointed her MD of NPA. What did the useful idiot Christian. Oby get? Nothing. Where are the so called missing girls? Still at large but they used it to deceive you to voting out a Christian president.

Talking about a Christian president. Do you know that in Islam it is forbidden for a Christian to hold a position of authority over muslims? Since they could not deny the achievements of our christian president Dr Goodluck Jonathan they spun a huge propaganda around corruption. He was vilified as the most corrupt president Nigeria ever had. The press had a field day reporting monumental corruption under Jonathan. They knew the only way they could get the attention of the Nigerian is to mention corruption and we all fell for the deception hook, line and sinker. I will be naive to say there was no corruption under GEJ. No government in the world can claim to be corruption free. Yet it was made to look like Jonathan had stolen the wealth of the nation and crippled the economy. Buhari made huge promises that got people ecstatic. He was seen as the Messiah. Nigerians refused to see the economic growth under GEJ. Even when Nigeria was rated as the 3rd and 1st fastest growing economy in the world and Africa no one paid any heed to it. Nigeria became the no 1 investment destination in Africa yet it seemed like it was all fairy tale. Today, just one year after GEJ we are no longer in the list of growing economies of the world. The effects are everywhere. The Nigerian economy is almost grounding to a halt. And guess what? They have now spun another propaganda that what we are experiencing now is the effect of the misrule of GEJ. Again, Christians are buying this crap and swallowing it like a hot plate of delicious food. Eight months into the Buhari regime, the bureau of national statistics release a report that over 4.5 million Nigerians have lost their jobs under Buhari. Time will fail me to expatiate.

Have you noticed how Christians and muslims are treated when it comes to corruption cases? They go to the media to convict people of corruption and when they eventually take them to court and the court gives a verdict they don’t like the disobey the court order. Mr Fani Kayode was in detention for over sixty days. You were told that it was because of corruption. How many muslims have been so treated? As far as I know. Only Dasuki is getting that treatment but again that is understandable. It was Dasuki, then a very junior officer that arrested Buhari during the babangida coup that overthrew Buhari in 1983. Muslims don’t forgive. The god of Islam requires muslims to take vengeance unlike our God that says vengeance is mine.

The most unfortunate part of this is that we Christians use our values to judge muslims yet we know absolutely nothing about their values. We don’t know anything about the tenets of that religion. Mohammed was a very vengeful person. He killed all those who made fun of him. Even those who criticized him. That is why Buhari cannot stand criticism.

We have seen in the news how innocent Christian women were killed by muslims and our dear president has been silent. Whole communities are being wiped out by Muslim Fulani herdsmen yet no word from your president. The latest is that farmers will now pay for protection while Buhari is now going to use the military to protect Fulani herdsmen and their cows. Buhari is now protecting murderers against innocent Citizens of the country yet you still can’t see anything wrong? Do you know what they have just introduced? It is called the jizya. Jizya happens to be the Islamic protection tax payable by Christians and Jews so they don’t get killed. Muslims don’t pay jizya. It may not make sense to you now but soon you will be told to pay protection tax. They may call it whatever but it is the jizya. And since only Christian communities will be attacked only Christians will have to pay.

Am going to stop here and update you as things unfold.

Abdul’rahman Mohammed Please copy and share on all your social networks. Christians must wake up