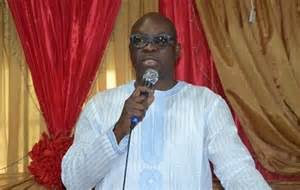 Ekiti State Governor, Ayodele Fayose, says the state government got a net allocation of N2.5 billion from the Federation Account for the month of July, contrary to insinuations by the opposition All Progressives Congress (APC) that it got over N9 billion. He made this disclosure in Ado-Ekiti on Monday while speaking on state radio and television.

In a statement by his Chief ‎Press Secretary, Mr Idowu Adelusi, the governor challenged the APC and any other person or group having any contrary figures to make that public. Brandishing the allocation paper that came from Abuja, the governor said after the deduction of over N900 million to service the state’s debts, what eventually came to the state was N2.51 billion. He added that the 16 local governments were given N2.01 billion.

“Those peddling unfounded rumours were given their own opportunity to lead the state and they left the state in huge debts. Their failed, white elephant projects litter the state. The uncompleted civic centre, the new Governor’s Office along NTA Road where they only scrapped the ground. The pavilion was uncompleted and left in a state of disrepair.

“I have always make known whatever comes to the state as allocations. There is nothing to hide as even the federal authorities do publish the allocations in daily newspapers. Their mischief has failed and by God’s grace they cannot defeat me. Let them continue to delude themselves, Ekiti people are no fools, they know the truth and those who stand for the truth,” he said.

The governor also used the occasion to announce that the social security scheme of the state government where 1000 people would be paid N5000 monthly would soon take off. He gave the assurance that the money would be paid directly into people’s accounts and not given to anybody to disburse. Governor Fayose also urged pensioners in the state yet to complete their verification exercise to do so between Tuesday and Thursday this week.

October 14, 2020
Bricks Write promises to be a fair and objective portal, where readers can find the best information, recent facts and entertaining news.
Contact us: news@http://brickswrites.com.ng