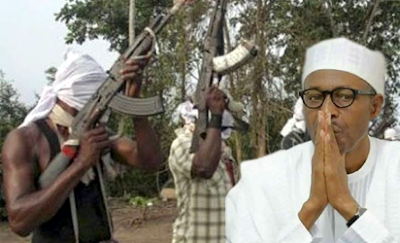 Niger Delta Avengers have written an open letter to President Buhari, accusing him of using the military through its new formation,  Operation Crocodile Smile, to carry out pre-determined genocide in the Niger Delta region. The Nigerian Army last week launched the “Operation Crocodile Smile” which they say is just a training drill designed to prepare the Amphibious Division for a better mastery of the Niger Delta terrain.

The militant groups in its open letter, allege that the military formation is part of a pre-determined genocide to be carried out in the Niger Delta region. The group says President Buhari’s statement in Kenya over the weekend that they should come forward for negotiation or be treated as Boko Haram members, gives credence to the allegations of pre-determined genocide.
Read the statement signed by the group’s spokesperson,  Brig.Gen Mudoch Agbinibo, below…

We call on President Muhammadu Buhari to put away the garb of a stooge to the imperialists, whenever he speaks outside Nigeria. We have listened carefully and halted hostilities in the Niger Delta; we expect a genuine and positive attitude to restructuring and self-determination for every component unit of Nigeria. Dear president, what makes those countries (Japan, Germany, France, USA, Britain etc.) great is the ability of their governments to accommodate internal protestations and conflicts for the greater good of their nations over the years. Please stop presenting your government as pawn to the web of military industrialists complex, whenever you leave the shores of Nigeria.

Nigeria is not a one-man personal property we must have these talks every time if this union must continue to work as one. The people of the Niger Delta have been living here from time immemorial, so we have the secret of the terrain and survival of amphibious operations. No amount of troop surge and simulation exercises will make you win the oil war, you can only win battles.

You cannot apply the might of the state to restore the people’s confidence in your leadership when you cannot differentiate between genuine demands and being mismanaged by disorganized characters and tribal lords around you in your government that are playing the court jesters role as well as counting the days that is left in your four years term. You can deceive the whole world but We cannot be deceived by the so glamorized ongoing military operations in the creeks Of Ijaw communities in the Delta coded ” Operation Crocodile Smiles”… the world should know that with your pronouncement in Kenya and your attitude to the military build up in the Niger Delta, it is crystal clear that the military has nothing less than a pre-determined genocide in Niger Delta and burn more already scared national resources to the pockets of those that have failed to locate the missing  Chiboks School Girls.

Conclusively, dear President Muhammadu Buhari please also tell those foreign nations that you are always at ease talking to, while refusing to listen to Nigerians that your troops are about to carrying out extra judicial killings in the Niger Delta in violation of article four of the Geneva Convention with “OPERATION CROCODILE SMILES”. All sane minds knows the meaning of ” CROCRODILE TEARS” so by code-naming your military operation CROCODILE SMILES only betrays your motives and attitude to the whole world about the Niger Delta question.

The whole world will surely applaud you in The Hague when you leave office! This is not the Nigeria and the world of the 1980s and 1990s under General Sani Abacha and your watch.