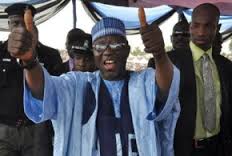 Governor Umaru Tanko Al-Makura of Nasarawa state has flagged off the Nasarawa state sight and services scheme in Karu local government area, 21years after its first  attempt in 1997 to take care of housing needs for low  and the medium income earners.

Al-Makura, while performing the flag off ceremony restated the
commitment of his administration in ensuring security and adequate
housing for the people to ease up the burden of accommodation for the citizens of the state and other Nigerians resident within the
corridors of the federal capital territory (FCT) Abuja.
The governor  said that since he came on board, one of the cardinal
policies of his administration is the developed infrastructure across
the state which he said culminated in the establishment of the
Nasarawa Geographic Information Service to champion land
administration and other developmental blueprints of his
administration. .
According to him, the flag off of the sight and services scheme was
aimed at attracting developers interested in housing to invest in the
state as government cannot afford not to develop the Greater Karu
master plan due to its proximity to the federal capital and what the
state stands to benefit.
He said “government is ready and has put every machinery in place to make the project a realizable dream, as it willing to allocate plots
to private spirited individuals with the interest of estate
development”.
He explained that “in 6 months when the project might have been
completed it will offer  housing to the low and medium class income
earners which will include a bus terminal and other services that will
give the estate a befitting outlook that can add value to Abuja.
Contributing, Architect Shehu Tukur, the consultant to the Nasarawa
state government on projects development, said the idea which is the
second attempt  is purely to established residential layout to ensure
urban renewal, he commended the governor for its resilience and the
will to actualize the project.