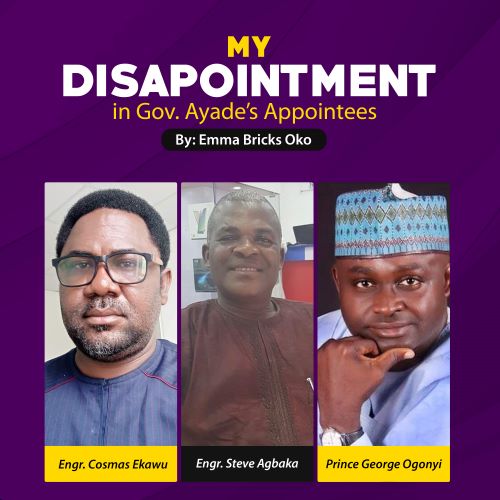 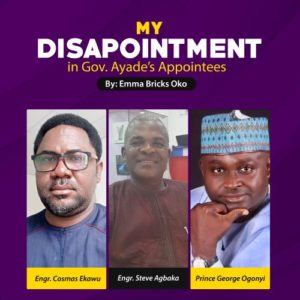 Political appointee exists across all nations with any type of governance system in the world.

Their appointments are often seen as rewards for the loyalty for the elected leader after a successful campaign.

But in recent time, Gov. Ben Ayade of Cross River State has changed the perception of political appointment as it has become an empowerment and appointing about two hundred (200) individuals as Aids, doubling portfolios with different names.

I am here to express my disappointment on a few appointees who have accepted the appointment without considering how demeaning and opprobrious it could be to their person.

Engr. Cosmas Ekawu (Special Assistant on IT Infrastructure) was one of the frontrunners in the botched Council primaries before Barr. Fabian Ogbeche was singlehandedly imposed on the people by the almighty Governor of Cross River State for the forthcoming elections.

Engr. Cosmas Ekawu is a professional of repute with about 20years in the civil sector, Money is ordinarily not his problem even though no one is gratified with money but not to stoop so low to accepting an Appointment as Special Assistant for settlement.

Ben Ayade’s appointment is SEAL OF LIPS against criticisms and none of you need to be told, it is not an opportunity to serve as intended, I thought an articulate chap would prove him wrong.

Just as other states, SAs are respected and well appreciated but not in a state like Cross River where a commissioner is not provided with office nor being paid his/her entailment since pronouncement that a Special Assistant should not turndown his appointment.

So, what is difficult in turning down the Appointment?

I guess the opportunity to meet and speak with the Governor which will never present itself? In case you don’t know, nobody is happy with Gov. Ben Ayade, his close chums are angry because he never listens; if you think that is the reason for accepting his appointment, I urge you to have a rethink now before it’s too late.

Prince George Ogoyi (Special Assistant on NGOs) is doing marvelously well in his job and personal businesses to heave a tantrum on the Governor rather than joining the league for an unrewarded position.

Engr. Steve Agbaka, (Special Adviser on Infrastructure) what an important designation but trust me, your hands will be too tight to do anything.

Resume your offices if you are ever given one and invite me for an interview on my Programme “Moment of Truth with Bricks” if you will be brave enough to say Nothing but the truth on the opportunity presented when you assume office. 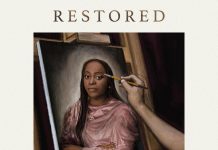