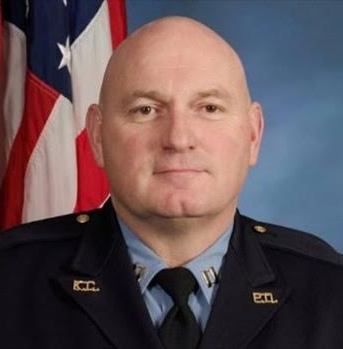 A police officer in Kansas City, Kansas, was killed on Tuesday afternoon after pursuing suspects allegedly involved in a drive-by shooting. Identified as Captain Robert Melton, 46 and it was also revealed that he had been with the Police department for 17 years.

According to reports, someone called  911 at around 1:30 p.m to say multiple people were firing at them from a car and Neighbors in the area confirmed that they heard 15 to 20 shots. When Melton arrived and pursued the car in a chase, the suspects bailed from the vehicle and opened fire, striking Melton.

Another officer who arrived the scene called for assistance and he was rushed to the hospital. However Dr. James Howard of the University of Kansas Hospital said Melton had no blood pressure or pulse when he arrived. Doctors and nurses tried for 30 minutes to revive Melton before he was pronounced dead. His death is the second for the Kansas Police department in two months.

Officer-involved shootings and attacks have been in the forefront in recent weeks with the killing of cops in Baton Rouge and Dallas.

January 25, 2017
Bricks Write promises to be a fair and objective portal, where readers can find the best information, recent facts and entertaining news.
Contact us: news@http://brickswrites.com.ng