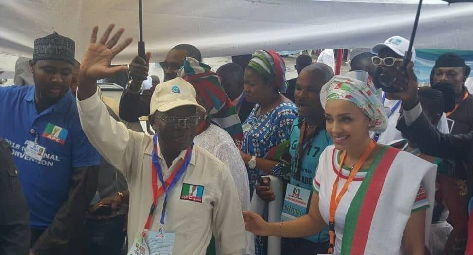 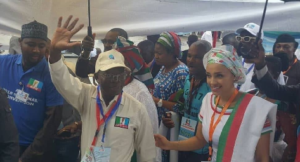 Hon.  Chief Val. Nzekwe, 2019 Aspirant, Ideato Federal Constituency congratulates the newly elected national chairman of the All Progressives Congress (APC), Comrade Adams Oshiomole and other elected national executive
Chief Val congratulates  Oshiomole on his emergence as the National Chairman of APC and expressed confidence in the process that brought Oshiomole saying it is a great boost to the party as preparations are top gear towards the forthcoming party primaries and general elections.
In his words: “The emergence of Comrade Adams Oshiomole as the newly elected APC National Chairman is a great development for our party as 2019 polls is in focus. Comrade Oshiomole, as we know, is a liberal, progressive and uncompromising advocate of true democracy. His stints as the President of the Nigeria Labour Congress (NLC) and the Governor of Edo State are fundamental underpinnings that he would bring the needed dogged leadership that would entrench core progressive values to our great party and ultimately bring about the much needed success in the forthcoming general elections.”
Val also acknowledged that the task of the newly elected National Executive is to strengthen the party’s organizational structures not only the national level but also state and local level.
The Aspirant tasked well meaning party leaders and members in general to support the emerged party executives at the national, state and local levels to achieve success in the coming elections.
“We urge all party leaders and members to unite and support the legitimately elected executives, at all levels of the party and to ensure that all emerge victorious in 2019. The task ahead is enormous as APC is poised to build on its success in the last election by winning in more states and at the national level. So, we must be united for this purpose,” Nzekwe noted.
the 2019 Ideato Federal Constituency aspirant however appreciated the outgoing executives led by John Oyegun and wish them well in future endeavors adding that leadership should not be left in the hands of the newly elected but progressives contributions should be made by party members.