Smiling as she sits in a float at St. Louis’ annual pride parade, Erin O’Flaherty gleams with a crown atop her head, a prize she clinched after being crowned Miss Missouri last month.

For O’Flaherty, being a part of the event had personal significance, as she is the first openly gay Miss America contestant in the pageant’s 95-year history.
Her experience in the run-up to this September’s Miss America pageant, she said, has been an atmosphere that is nothing short of inclusive. 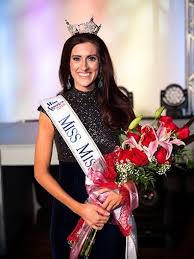 “The Miss America organization has done a great job of wrapping their arms around me,” O’Flaherty says Ashleigh Banfield. “Everyone who I’ve come into contact with has been nothing but supportive.”
She added that she has never encountered any problems with fellow contestants, and that everyone has become lifelong friends, “bonding through the process.”
O’Flaherty has previously voiced concern over the lack of LGBT representation in the public sphere, and her personal platform issue for this year’s competition will be suicide prevention, an issue both inside and outside her community.
While competing in the pageant, O’Flaherty said, she wants to use the national stage to foster a greater conversation about suicide.
Working with the American Foundation for Suicide Prevention and the Trevor Project, O’Flaherty said she hopes to be a trailblazer for ending the stigma that often surrounds suicide and mental illness.
“I lost someone to suicide when I was 13,” O’Flaherty told Banfield. “It changed my life. I hope that by sharing my story I can inspire others to speak out on their experiences, because suicide is a subject that is often taboo.”

Can’t Believe What A Daura Man Was Found Doing

February 5, 2017
Bricks Write promises to be a fair and objective portal, where readers can find the best information, recent facts and entertaining news.
Contact us: news@http://brickswrites.com.ng