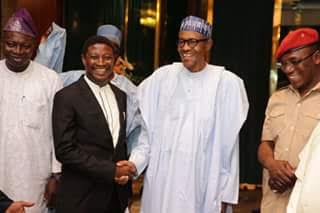 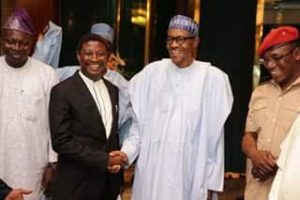 The Christian Association of Nigeria (CAN) on Thursday  tasked President Buhari to put an end to the abduction and marriage of young Christian girls to traditional rulers and Emirs in the North.

The religious leaders made the call during a visit to the pr‎esidential villa. Speaking to state house correspondents after the visit, the Northern CAN Chairman, Yakubu Pam‎ said;

“We came to present ourselves as the Northern CAN chapter to the President and to tell him some of the challenges that Northern Christians are passing through. One of those challenges is that we are having difficulties in expressing our faith in the northern part of the country. We have also told him some of the difficulties we are passing through with the Fulani herdsmen. The farmers need to be protected and in fact, we told the President that we have been encouraging our youths to go into farming and they need to be protected and when they come into the city, there is no employment; that is why farmers must be protected. We also talked on the issue of girl child abduction in the North. In some Northern states, some young girls and children are being abducted at 12 years old and the parents will just hear that the girls have been married to traditional rulers and emirs. This is gathering a cloud of crisis already and if that is not taken care of it will lead to a serious crisis. These are the issues we told the President. We congratulated him on the wedding of his daughter, the fight against corruption and Boko Haram war as people have started returning to their homes; as well on the return of the Chibok girls” he said

What Fulani herdsmen allegedly did to 30 year-old Delta Farmer