Home NEWS el-Rufai Not Against Any Religion – Archbishop 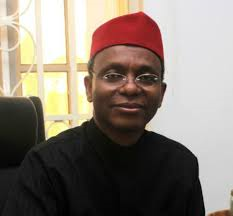 The Methodist Archbishop of Kaduna, Rev. S.O. Idoko, has said that Governor Nasir El-Rufai, is not against any religion.

Archbishop Idoko, while praising the governor for his prompt response to the request of the Methodist Church for another plot of land in Kafanchan, Southern Kaduna to build a church called on the northern governors to emulate him.

Rev.Idoko, called on clerics to pray for unity and peace of the country adding that every religion has the right to practice in Nigeria without fear or molestation.

According to him, the Methodist Church appreciates the prompt action of el-Rufai in acceding to the Church’s request. He said, “I will like to appreciate the prompt response of His Excellency to the request that His Eminence Dr. Uche, the Prelate of Methodist Church of Nigeria, made when he paid His Excellency a courtesy call. I’m particularly happy because, in the first place, it will alleviate the suffering of the people in our Kafanchan Church.

“This one that he (El-Rufai) has done is going to further buttress his promise that he is not against any religion and that he is not partial in dealing with issues of religion.

“So, I want to seize this opportunity to request that other Northern state governors emulate this so that we would not have problems to have places of worship. They should change and emulate what the governor of Kaduna, Malam Nasir El-Rufai is doing.”

Archbishop Idoko added: “I want to be grateful for the concerns he has shown to the people of Southern Kaduna too; the presence of security men has greatly been enhanced and he mentioned that day that there will be permanent structures of law enforcement presence in Southern Kaduna. We are waiting to see that one done. It will go a long way to really take care of the problems we have from time to time in Southern Kaduna.”

August 30, 2016
Bricks Write promises to be a fair and objective portal, where readers can find the best information, recent facts and entertaining news.
Contact us: news@http://brickswrites.com.ng