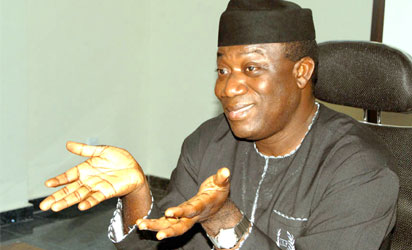 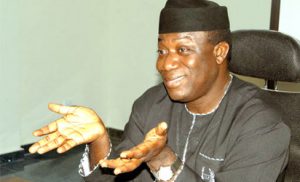 The former governor of Ekiti State and Minister of Mines and Steel Development, Dr Kayode Fayemi and his Finance Commissioner, Mr Dapo Kolawole have been declared unfit to hold any public office in Ekiti State and Nigeria for 10 years
The decision followed the acceptance of the report of the white paper on the Judicial Panel of Inquiry by the Ekiti State Executive Council.
The ban was predicated on the refusal of the duo to appear before the commission even after the determination of the case challenging the inauguration of the commission of Inquiry before the Ekiti State High Court. “Their disrespect to the constituted authority and the undignified roles they played in the whole contracts saga were obviously against the interest of the state they were supposed to protect.
They are banned from holding public office in Ekiti and any part of Nigeria. ” Briefing newsmen after the State Executive Council has received and deliberated on the commission’s white paper, the Commissioner for Information, Mr Lanre Ogunsuyi said that Ekiti State is a pacesetter when it comes to the management of finances. ” Government view accountability and probity as hallmark of good governance. Therefore, the government decided to set up the Judicial Panel of Inquiry in line with its law enacted in 2012. “The government viewed seriously the report and it intend to carry out all the recommendations in the report. ” Other highlight of the white paper, the government mandated Fayemi and his Finance Commissioner to refund N2.7 billion which was allegedly allocated for the execution of the contract for ultra-modern market but never executed.
The government further direct the Ministry of Justice to institute appropriate legal actions to this effect. “His Excellency, Dr Kayode Fayemi and the Commissioner for Finance, Mr Dapo Kolawole should be made to account for the difference of N340 million from the N1.5 billion earmarked from the bond proceeds for the upgrade of infrastructure at Ikogosi warm spring which could not be accounted for. ” The former governor and his Finance Commissioner were to also pay other monies running to billions of Naira to the state government coffers.
Meanwhile, Governor Ayodele Fayose has defended the government decision on the white paper, saying that the government has done what is right He stated this while receiving the report of the White Paper Committee set up to consider the report of the judicial panel of inquiry into the financial transactions of the last administration between year 2010 and 2014. He said, “We are doing what is right within the ambit of the Law by appointing competent people for the assignment. We must be seen to be doing the right thing and it is not wrong to ask how the finances of the state have been appropriated within a given time and we are following due process. “The APC government says they are looking into this and that. Even if you say the panel is biased, what can anyone do? I am not part of the panel that sat for the inquiry. They submitted the report to me and I presented it to the appropriate organ and I will do the same with this document.
This is not personal in any way, we are only doing the right thing and following due process. ” The Presidency appointed Ibrahim Magu, and Professor Mamoud and these people are doing their work. The Federal Government also appointed jugdes, does this mean that these appointees would not do the right things?, ” he said.