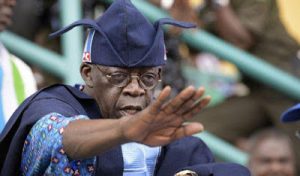 National leader of APC, Bola Tinubu, has vowed that Nigerians will resist any coup attempt by any section of the military.

Bola Tinubu said this against the backdrop of rumors of some politicians having clandestine meetings with some military officers in a bid to take over power since President Buhari is away for medical checkup.

Recall that last week, Chief of Army Staff, Lt. Gen. Tukur Buratai, released a statement in which he warned Army officers to steer clear politics.
Reacting to the rumor, the APC chieftain said Lagos in particular will resist any coup attempt. Tinubu said this when he spoke at the Parliamentary Session at the Lagos State House of Assembly, Alausa, Ikeja, being organized as part of activities in commemoration of Lagos@50 and second anniversary of the 8th Assembly of the Assembly.

“I want to add my voice to that warning of coup attempt.They should not try it, those who want to break the democracy that many died for. You will have no fertile ground to plant the seed in Lagos. It is a bad product and I can assure you that we will reject it. Lagos will resist any form of action that plans to end the democracy we clamor for”he said

Vote Contestant No. 6 Chetachi U.