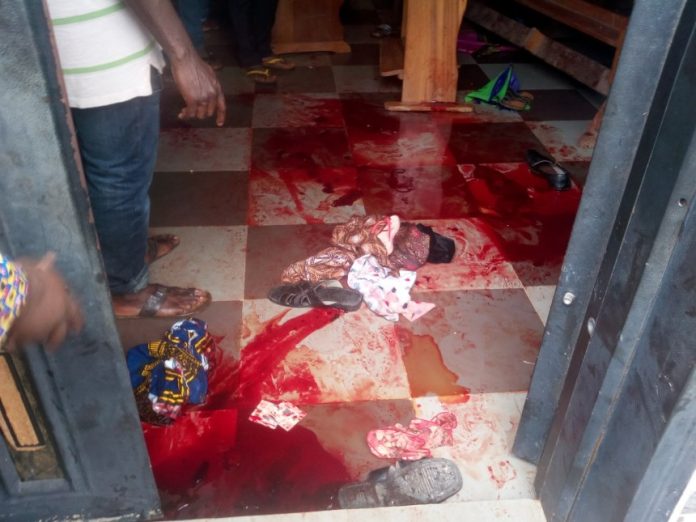 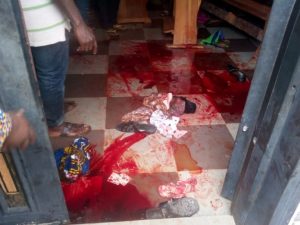 Ginika Enemonwu was an Mbaise native who grew up in Ozubulu, Ekusigo LGA of Anambra state. He was killed in far away Johannesburg, South Africa, in October 2013. His murder set in motion a chain of events that led to a massacre of church goes in Ozubulu almost four years later.

Gunmen yesterday invaded St. Philip’s Catholic Church, Ozubulu, Ekwusigo Local Government Area of Anambra State and opened fire on worshippers, killing at least eight people. Worshippers who escaped said the gunmen, who all communicated in Igbo, fled the scene after emptying a hail of bullets into early morning worshippers. The Parish Priest of St. Philip’s Catholic Church, Jude Onwuaso, said that the attack took place at about 6.30 a.m. during the early morning Mass.

According to Fr. Onwuasot, an unidentified man came into the church, shot at a man, Akunwafor Ikegwuonwu, before shooting sporadically at other worshippers. A member of the church choir, who wished to be unnamed who witnessed the incident, said that the church was dark as there was no light. She said that the generating set suddenly developed a fault; so, the mass proceeded with the congregation using candles. According to her, the gunman, after the shooting, jumped into a waiting car with a driver. Following the massacre, the bodies of the dead, and those who were injured were taken to the Nnamdi Azikiwe University Teaching Hospital, Nnewi, and all medical personnel who were attending Sunday morning mass at the hospital chapel were pressed into service at the hospital’s casualty unit for surgery.

Speaking in Awka, the Anambra state Commissioner of Police, Garba Umar, confirmed that a lone gunman killed eight worshippers and injured 18 others in the early morning attack. According to Umar, preliminary investigations showed that the attack was carried out by a native of the area. “From our findings, it is very clear that the person who carried the attack must be an indigene of the area.

“We gathered that worshippers for 6 o’clock Sunday mass at St. Philip Ozobulu were in the service when a gunman dressed in black attire covering his face with a cap entered the church and moved straight to a particular direction and opened fire. “The man after shooting at his targeted victims still went on a shooting spree, killing and wounding other worshippers,” Umar said.

Although no arrest had been made as of the time of filing this report, the police have already learned that the attack followed a quarrel between two natives of Ozubulu residing overseas, and Mr. Umar assured that the police were on top of the situation.

According to two residents of Ozubulu who insisted on anonymity before speaking with Daily Times, the roots of yesterday’s massacre were planted four years ago in South Africa, when an indigene of Ozubulu nicknamed “Bishop”, based in South Africa for many years, is alleged to have killed an indigene of Mbaise in a drug trade dispute. Aloysius Nnamdi Ikegwuonu, aged 35, better known by his nickname, “Bishop”, has built a reputation as one of the biggest philanthropists from the town. He has built and donated churches (including St. Philips, where people were massacred), constructed schools, hospitals and given scholarships.

In May, Anambra Governor Willie Obiano commissioned a 12km road and a bridge built by Chief Ikegwuonu (he is a titled chief) linking Ozubulu with the neighbouring Ukpor in Nnewi South LGA. Enemonwu, , whose death caused the bad blood, was an Mbaise native who had lived in Ozubulu. Bishop took him to South Africa for a “joint venture” and when the proceeds of their arrangement became significant, Bishop claimed a huge chunk of the profits, a situation which Enemonwu found unacceptable. Following that disagreement, Enemonwu reported the matter to the Mbaise Union in South Africa, who took the issue up, and began fighting for their brother. He allegedly told the Mbaise Union of his fear that Bishop may assassinate him, and in the event of such an event, they should know who to hold responsible. Not long afterwards, he was killed, and the effort to retaliate began. It was reported that many of Bishop’s boys and associates have been killed since then and also someone else close to Bishop was murdered in a bar in Johannesburg last week before the hit was carried out in Ozubulu.

Now, the event that happened in South Africa seems to have touched home. Some people from Mbaise, in neighbouring Imo State, insisted that Bishop must pay a price for the killing of their brother in South Africa.Many prominent people and the traditional rulers of both communities intervened to settle the rift and sue for peace, to no avail. Along the line, it was believed that the case has been settled. Then Bishop was sighted in Ozubulu a few days ago, and information is believed to have filtered to Mbaise, which possibly encouraged the gunmen to trail him. According to sources, Bishop left town and is back in South Africa.

When the gunmen arrived at the church and did not find him, they shot several people, including Bishop’s father, Akunwafor Ikegwuonwu, and some other worshippers. A witness who spoke to Daily Times said that the gunmen promised to return if Bishop did not find a way to pay back what he owed, along with some restitution for their deceased brother. While most Nigerians in South Africa are law abiding, there is a widespread perception that many others are involved in the drug and illicit sex trade, a situation which has sparked protests among locals who accuse them of taking their jobs and hurting their youth, and in some cases, violence against Nigerians.

South Africa experienced its worst outbreak of violence against foreigners in 2008, when more than 60 people died. In 2015, similar xenophobic unrest in the cities of Johannesburg and Durban claimed seven lives as African immigrants were hunted down and attacked by gangs. And in February, police used rubber bullets, tear gas and water cannon to disperse crowds at an anti-immigrant march in the capital, Pretoria after angry mobs attacked Nigerians and looted shops in townships around Pretoria and parts of Johannesburg.

Reactions pour in Jude Emecheta, who hails from Ozubulu, told the News Agency of Nigeria that “a dark cloud has befallen my peaceful town.” Mr. Emecheta, who is the Managing Director of Anambra Signage and Advertisement Agency, ANSAA, said that the losses from the attack were too much for the people to bear.

He wondered why brothers could visit such an attack on their people and urged those involved to “sheathe their swords.” Also speaking with NAN, Oseloka Obaze, a former Secretary to Anambra Government, said such a callous attack dehumanised the society. “My heart goes to the family and parishioners of St. Philips Catholic Church, Ozubulu, where unidentified gunmen reportedly killed several church members and wounded several others early today,” Obaze said.

On his part, Osita Chidoka, a former Minister of Aviation, said he was saddened by the incident. Mr. Chidoka decried the desecration of the temple of God, adding that nobody attacked anyone in the church even during war times. “This is tragic; the church is a place of refuge to anyone who runs into it, and this wicked, barbaric and mindless blood-letting, shows that something has gone wrong on our psyche. “My heart goes to the bereaved at this moment of pain. I pray that God grants the soul of the departed eternal rest as I urge the security agents to fish out the perpetrators and make them face the law,” he said.

In his reaction, Victor Oye, the National Chairman, All Progressives Grand Alliance, APGA, said that no amount of provocation could justify the killing of innocent people who had gone to worship in a Church. Describing the attack as wicked, Mr. Oye urged the police to get those responsible for the massacre. “As a political leader, I totally condemn the Ozubulu Church shooting as dastardly, unjustifiable and callous. “Nobody has the right to kill innocent citizens.

The Police and other relevant security agencies should ensure that the perpetrators of this crime are caught and made to face justice,” he said. In a statement received by Daily Times, the Speaker of the House of Representatives, Yakubu Dogara, described the attack as abominable, barbaric, inhuman, and the height of wickedness. Dogara said his heart was broken by the sad news of the massacre of innocent worshippers in cold blood by people he described as “sons of perdition whose souls will rot in hell.”

“Have we lost our humanity? Where is the place of sanctity of life and sacredness of worship places in our society? What offence did the worshippers commit to warrant their massacre in cold blood by wicked souls and heartless men?” Dogara asked, then reiterated his call for the overhaul of Nigeria’s policing architecture that will lead to reform of the Police Force, equip them with modern and sophisticated gadgets so as to discharge their duties of protecting lives and property effectively, and ensure social order in the society.

Stanley Ikechukwu, an analyst at SBM Intelligence researched and wrote this story with reports from the News Agency of Nigeria – Story originally published on DailyTimes..