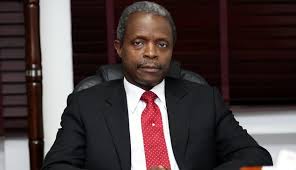 Acting President, Yemi Osinbajo, is set to suspend the Acting Chairman of the Economic and Financial Crimes Commission, EFCC, Ibrahim Magu, and Chairman of the Independent Corrupt Practices and other Related Offences Commission, ICPC, Ekpo Nta, for alleged conspiracy.
Special Assistant to the President on Prosecutions, Chief Okoi Obono-Obla, who made the revelation in Abuja, said this followed the refusal of Heads of the Agencies to release the case files of over 35 ex-Governors and Senators, to the AGF.
Obono-Obla revealed that the case files requested by the AGF in separate letters to both Agencies, were for ex-Governors, including: Bukola Saraki (Kwara, now Senate President ); Ali Modu Sheriff (Borno); Godswill Akpabio (Akwa Ibom); Orji Uzor Kalu (Abia ); Chimaroke Nnamani (Enugu); Saminu Turaki (Jigawa ); Sule Lamido (Jigawa); Joshua Dariye (Plateau ); Ahmed Yerima (Zamfara ); Gabriel Suswam (Benue ).
Others were: James Ibori (Delta); Martin Elechi (Ebonyi); Danjuma Goje (Gombe); Murtala Nyako (Adamawa); Ikedi Ohakim (Imo); Gbenga Daniel (Ogun); Achike Udenwa (Imo); Ubong Victor Attah (Akwa Ibom); Jolly Nyame (Taraba); Rasheed Ladoja (Oyo); Adebayo Alao- Akala (Oyo); Adamu Mu’azu (Bauchi ); Lucky Igbinedion (Edo) and Peter Odili (Rivers).
He explained that the two anti-corruption agencies have withheld the files from the AGF since July 2016, when the request was made, adding that, this had caused a setback to the anti-graft campaign of the Federal Government.
Addressing Newsmen on Saturday, Obono-Obla said: “When this administration came on board, one of the reforms that were initiated was the setting up of a National Prosecution Committee, to complement the efforts of the anti- corruption agencies and the Department of Public Prosecution.
A team of highly motivated Lawyers, Investigators, and Policy makers were brought in. The Committee was inaugurated on May 27 2016, by the then Vice President, now Acting President.
“The essence of the Committee, was for us to take on the looters of our treasury, and we have to ask the Heads of the anti-corruption agencies to furnish us with case files, starting from 2006.
“You remember that former EFCC Chairman, Nuhu Ribadu, had told the National Assembly at a time, that 32 former Governors were being investigated by the Commission.
“So, we demanded the reports so that we could file criminal proceedings against those ex-Governors indicted in those reports. I also made a similar application to the ICPC, but they refused to comply.
“Most important, we asked them to give us the files of Senators under investigation. We wanted to, after getting those files, file an order of interim attachment of properties belonging to the suspects under investigation.
“This is because under Section 28.4 of the EFCC Act, when suspects are arrested, the Commission attaches all the properties acquired under that financial crime.
“We wanted to really wage a war, get those files and carry out those attachments, so that Nigerians will know we are really serious about this war on corruption.
“And disappointedly, they refused to hand over those files, and have refused to work with the AGF, the Chief Prosecutor of the country, and I see no reason why agencies under his supervision should not cooperate with him.
“The AGF is bothered, and he may likely take a definite position. What the bosses of the Agencies have done amounts to insubordination under the Public Service Rule, because the AGF is a Chief Legal Officer, and the agencies under him are to respect him.
“The AGF’s position may be to report the Heads to the Presidency.”

July 21, 2016
Bricks Write promises to be a fair and objective portal, where readers can find the best information, recent facts and entertaining news.
Contact us: news@http://brickswrites.com.ng