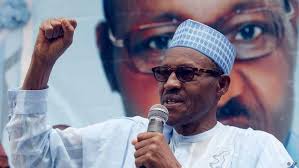 the following quotes are said to be the Nigeria’s ruling president Quotes during his struggle to become the president again after his military regime.  if it true! Should he remain the president and change the happy Nigeria as a country to suit of the Islam as QUOTED?

1. “I will continue to show openly and inside me the total commitment to the Sharia movement that is sweeping all over Nigeria. God willing, we will not stop the agitation for the total implementation of the Sharia in the country.” – Buhari (News24, August 27, 2001)
2. “If what happened in 2011 should again happen in 2015, by the grace of God, the dog and the baboon will all be soaked in blood.” – Buhari (Vanguard May 15, 2012)
3. “The last general election was anything but free and fair. The only political parties that could complain of election rigging are those parties that lacked the resources to rig.” – Buhar (First Speech after Military Coup, 31 December, 1983)
4. “No no no, Abacha did not steal Nigeria’s money.” – Buhari (10th Anniversary of Abacha’s death)
5. “The declaration of state of emergency in three Northern states of Adamawa, Borno and Yobe is a grave injustice against the North.” – Buhari (Liberty Radio, June 2, 2013)
6. “I live on borrowing. I borrowed from the banks to build the house in Daura and the one in Abuja and Kano. The bank then was Barclays, now Union Bank.” – Buhari (The SUN Exclusive Interview, December 24, 2012)
7. “When the Niger Delta militants started their activities in the South-South, they were invited by the late President Umaru Yar’adua. An aircraft was sent to them and their leaders met with the late President in Aso Rock and discussed issues. They were given money and a training scheme was introduced for their members. But when the Boko Haram emerged in the north, members of the sect were killed”. – Buhari (Liberty Radio, Kaduna May 14 2012)
8. “Muslims should only vote those who will promote Islam. We are more than the Christians if you add our Muslim brothers in the West.”- Buhari (Liberty Radio Kaduna, 2003)
9. “This campaign is the third and last one for me; since, after it, I will not present myself again for election into office of the president.” – Buhari (April, 2011 at the Int’l Conference Centre, Abuja)
10. “I’ll stabilize oil market if elected.” – Buhari (Channels TV Interview, 2014)
11. “Why should Christians be concerned when Muslim cut off their limbs? After all, the limbs that are being cut off are Muslim ones and not Christian. So why should Christians bother about it?? – Buhari (Liberty Radio, Kaduna 2003)
12. “I will not have office of the first lady if I’m elected president.” – Buhari (2014)
13. “If There Is a repeat of the Civil War again, I will kill more Igbos to save the country.” – Buhari (BBC Hausa Service, 2015)
14. “I can die for the cause of Islam if necessary. We are prepared to fight another civil war. We cannot be blackmailed into killing Sharia.” – Muhammadu Buhari (Freedom House, 2000)
15. I’ll make Naira equal in value to dollar.” – Muhammadu Buhari (Vanguard, March 23, 2015)
Compiled by Slik Austin
NewsDay Reporters